[The goal of this journey (see previous post) was to flyfish for trout in the mountain streams of northern Afghanistan, during the days when Afghanistan was largely occupied by the U.S.S.R.] The northwest Pakistan town of Chitral is about 225 miles from Peshawar, our starting point, and is not that easy to get to. Note this, from the website visitpak.com: “You possibly can new driver to be able to Chitral Pakistan by street by way of the actual Malakand Peas, yet at 3, two hundred metres (10, 500 feet) choosing obstructed by snowfall through winter weather and it is only open up from May to be able to October. Notice in addition that wills almost the entire street is only suitable for 4Wd automobiles.” See what I mean? Which is why Chitralis are basically landlocked for the entire winter with no road access to the outside world. There are occasional plane flights, but “… they tend to be determined by the next wind storm.” Nonetheless, Chitral, a smallish city of 20,000 hardy souls, is a comfortable enough destination in the summer, when its roses are in bloom and the Kunar River is below flood stage. And on clear days Tirich Mir, the highest peak in the Hindu Kush at a bit over 25,000 feet, offers its extravagant self as the only scenery a visitor will need. Stephen and I stayed in Chitral for acouple of nights and then headed for Garam Chashma, a mere 25 miles away but really, really hard miles even in a 4WD Toyota. To a camel, or one of Pakistan’s many donkeys, the road (and again, I use the term loosely) might look like I-95 from Bangor to Houlton. To the untrained human eye it looks like an empty riverbed, if you can imagine a river running along a mountain ridge. Progress was slow. Then it got a lot slower: a landslide had blocked the way with tons of gravel and boulders. The fortunate part was, we arrived at that spot after the landslide. There were Pakistani vehicles, including a battered old bus, on both sides of the slide, and some of the men were picking away at the rubble one stone at a time. It was clear the road would not be passable that day. We turned back toward Chitral. I could sense my flyrod’s disappointment. We drove for a couple of miles and saw two men walking down the road, traveling in the same direction as we were. They had probably been on the bus that was trapped on the other side of the landslide. We stopped and, through sign language and Stephen’s smattering of dialect, offered the men a ride, which they happily accepted. One was named Ibrahim (many Muslims have Old Testament names). After a few miles on the camel road Ibrahim signaled for a left turn onto what could have been a goat trail. We turned left. The trail grew narrower; grass grew between the ruts. The men urged us on. Somehow, we trusted them. The trail ended at a broad green valley where men and women were working in the fields, tending to crops. I thought I had arrived in Shangri-la. We followed our guides down a path through the fields and across a rickety footbridge over a swift stream (of course I wondered if it held trout!), then along a tree-shaded path until we came to the men’s village, a collection of humble stone-and-thatch dwellings that could have belonged to any century of the past twenty — except, perhaps, ours. We learned that these people were Ismailis, a branch of Shia Islam headed by the Aga Khan. A charpoy, a simple twin-size rope bed, was brought to a clearing in the center of the village for us to sit on, and what appeared to be every male inhabitant of the village — all the men and boys — plus the unmarried girls, some of whom were quite flirtatious, gathered to quietly stare at us. I started taking pictures.

Tea was brought. Our hosts were quite proud of having brought us to the village and doubtless racked up many prestige points. Were we their first Western visitors? Perhaps. Ibrahim indicated that his people would like us to stay for the night. They would kill a couple of the scrawny chickens that pecked in the dust around our feet. But we demurred, as politely as we could, and Ibrahim led us back to the Toyota and we retraced our route back to Chitral. Later, I regretted that we did not stay, not just for a night but maybe a few nights. The visit to the Ismaili village was somehow more rewarding than any day I have spent fishing. 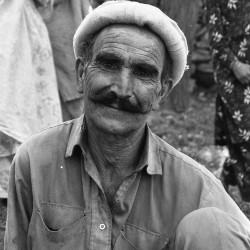 Ibrahim and two of his sons.

Seniors Not Acting Their Age

Acadia on My Mind